Following the success of Phoenix, BABYLON was written by Andy Day based on the lives and experiences of the cast.

Dear Daughter, If you never meet me…
I want you to know that my first thoughts of you were full of hope. As you grew inside me, I knew nothing about you, and I was still so deeply in love with you that I could hardly think. Pretty soon the past caught up, though. The walls closed in. The traps were set. I can’t allow them to win.  As long as I am still standing the fight is on. One day we will read this letter together and laugh in victory. I’m living for that day.

“Knowing the realness of the play’s beating heart gives it an authenticity which matches the cast’s energetic, honest performances … For many, this is their first ever acting role but this fact rarely shows through and the standard is kept universally high … BABY/LON is both engaging and affecting, dealing with important issues in a way that makes them immediately real to anyone watching.”
★★★★ Broadway Baby

“There is unsettling background music playing, and at first it feels as though I’ve stepped into an art installation. As the show begins with Madeline (Bobbi Byrne) boxing in a spotlight and suddenly descends into chaos, I was gripped. I immediately felt I was going to see something unlike anything I’d seen before … The show builds to such a climax that I felt completely part of the action myself, and to be completely honest felt quite uncomfortable a number of times. The ending is incredibly intense, and the use of the space in the final scene is jaw dropping … Being an immersive performance, following the story and cast around the room and standing just metres from the action, I felt as though I was directly involved.”
★★★★ Everything Theatre

“The delivery and context is unique and the energy and passion of the cast is inspiring…It’s an amazingly original idea and performed by a cast with a sparkling connection and chemistry throughout … The action itself is excellent: gritty and sometimes difficult to watch knowing the personal nature of events … Everything about this show keeps you on your toes; it’s the strange encroachment of the ‘real’ that made this production a startling and unique experience.”
★★★★ What’s Peen Seen?

“The visceral story is played out in an emotional dance which tears at your senses, while a barrage of visual and audio projection create an unsettling backdrop … The tense, violent finale at the rear of the theatre opens into the real world, heightening the fact that these heart breaking situations have actually happened to the actors and this is not just about entertainment.”
Ruth Stivey, East End Review

“The result is an extremely memorable production, that will have your heart pumping and your nails bitten.”
Destination Hackney 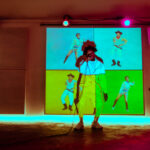